Unlock! is a series of escape adventures for up to six players. With one hour on the clock, players work through a deck of sixty cards as a team, searching for clues, combining objects, and solving puzzles. The free Unlock! companion app runs the timer while also providing clues, offering hints, and confirming successes. Once the team has reached a solution and entered the correct code into the app, they will escape and win the game!

Unlock!: Mythic Adventures contains three scenarios revolving around these themes (not the official name of the scenarios): 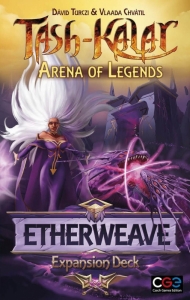 Arcane beings transform the arena, intertwining space and time, bringing visions of things yet to come. You play with the threads of causality itself when you embrace the tactics of

In the third expansion to Tash-Kalar, you will discover beings with effects that can travel backwards through time. These warp effects can be played even before the being's pattern is formed. But beware! Leaving loose threads does have its consequences. You must summon the being to fulfill the fate that your tactics have foreseen. 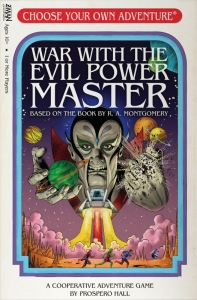 Choose Your Own Adventure: War with the Evil Power Master

For centuries, the Lacoonian System, an alliance of the most advanced civilizations in the galaxy, has lived in peace, but now the Evil Power Master has returned and is leading a destructive rebellion. The Lacoonian System's Rapid Force crew must band together, follow data and clues the Evil Power Master left behind, and discover his location to defeat him in an epic final battle. Can you restore order to the galaxy?

Explore a brand new co-operative narrative adventure with the next entry in the Choose Your Own Adventure game series: War with the Evil Power Master! Travel to the furthest reaches of the galaxy, make risky choices, collect items, and face off against dire challenges. 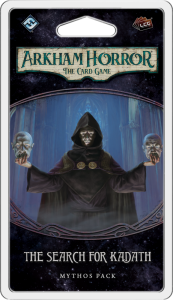 Arkham Horror: The Card Game – The Search for Kadath

Journey across the dreamlands in The Search for Kadath, the first Mythos Pack in The Dream-Eaters cycle for Arkham Horror: The Card Game! After taking your first steps into the Dreamlands, your mind teems with anxiety over the quest ahead, dangers you left in the waking world, and the fate of dreamers who have come before you. Are they also somewhere in these expansive lands? Perhaps if you find the lost castle and return with proof of the Dreamlands, you can save everyone: yourself, your friends, and the other dreamers as well. So, despite the advice of the Dreamlands’ inhabitants, you and your companions seek unknown Kadath, where the gods dwell.

The Search for Kadath is Scenario 2–A of The Dream-Quest. This scenario can be played on its own in Standalone Mode or combined with the other expansions in The Dream-Eaters cycle to form a larger four-part or eight-part campaign. As your team of investigators becomes separated between the dream and the waking worlds, you will need to work together across realms to earn victory and return home. To help you achieve this, you will find new player cards that create new synergies between investigators, letting you offer aid during your turns or even the Mythos Phase. Discover the meaning behind your dreams and discover the proof you seek!